The powerful and compact battery pack with a capacity of 2.6 Ah at 37 VDC output voltage ensures uninterrupted operation of the door system. Up to 800 opening cycles or continuous opening over 24 hours are then possible with a full charge, depending on the door dimensions and the programmed settings.

The battery pack can be attached to the swing door operator DFA 127 or elegantly integrated into the extended operator variant in the kit version.

If the power failure lasts for a long time, the switched-off door system can be set to battery operation by means of remote control (wake-up mode). One impulse is enough and the drive control starts, opens the door, returns to idle mode and the door then closes again with spring force. The built-in buzzer optionally signals mains-independent battery operation. 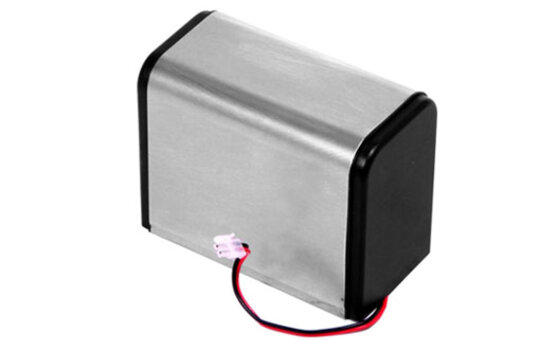 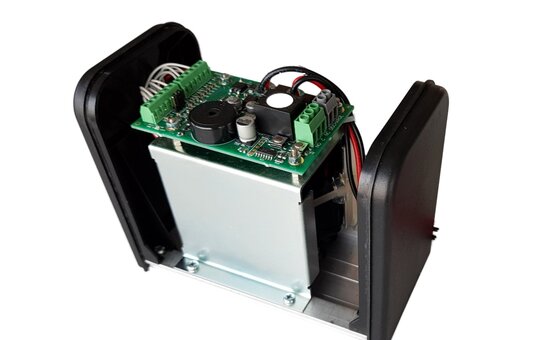 The battery pack is switched on and the operator operates on battery power in the event of a power failure.

Battery operation can be activated after a power failure, e.g. via a building management system or a smoke extraction system. If the potential-free contact of the external system closes, the battery operation is activated and the STG 127 starts up. If there is a connection to SSK of the door control unit, the door opens and remains open.
If the contact is opened, battery operation switches off and the door closes with spring force. This function does not interrupt the loading process.

A relay contact is connected to the SSK terminals of the door control unit. In the event of a power failure, the relay switches permanently, the door opens and remains open.

If the system is in battery operation after a power failure, it will beep every 5 seconds. The volume can be adjusted in two steps or the beep can be muted.